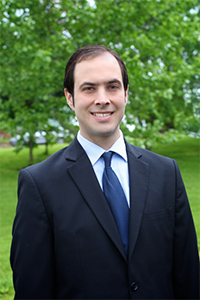 Jamie R. Hall, Esquire, is the owner and founder of the Law Office of Jamie R. Hall.  Mr. Hall’s concentration is in Social Security Disability and Long Term Disability claims.  Prior to founding his Law Office, Jamie was employed by a large defense firm in Binghamton, New York, and a small plaintiff’s firm in greater Philadelphia.

Jamie’s experience includes representing Social Security Disability claimants before administrative law judges and the Appeals Council, including claims in 24 states.  He has also represented long term disability claimants from several states in administrative appeals and before the federal courts, including individuals from Pennsylvania, New Jersey, New York, Ohio, Delaware and Virginia. Mr. Hall has also served as an arbitrator for the Montgomery County Court of Common Pleas, and as the Editor of the Montgomery County Law Reporter.

Mr. Hall is a graduate of Villanova University’s School of Law.  While at Villanova, Jamie was an associate editor and published member of the Law Review.  He also served as an intern under the late Senior Judge Charles Wiener of the Eastern District of Pennsylvania and was a research assistant for numerous professors.

Mr. Hall is an avid supporter of the Multiple Sclerosis Society, frequently donating his time and energy to the Society’s efforts.  Mr. Hall regularly volunteers his expertise, providing seminars on Social Security disability issues to the MS Society’s membership.  He is also a member of the Society’s 2010 Leadership Class and has served as a corporate sponsor for various programs, including MS Walk and MS Bike.  Mr. Hall has also assisted as an editor for the Society’s National SSDI guidebook.

Jamie also supports several other local charitable organizations.  He provides disability seminars in coordination with the Leukemia and Lymphoma Society, the Epilepsy Foundation of Eastern Pennsylvania, as well as the Muscular Dystrophy Association.  A graduate of Mansfield University, Jamie served as the president of the Mansfield University Alumni Association from 2016 to 2017, and was a member of the Alumni Association’s board of directors from 2011 to 2017.

Social Security Disability and MS: The Impact of the MS ‘Listing’, Consortium of Multiple Sclerosis Centers – May 2010